Where Custom Suits Merge With Ready to Wear 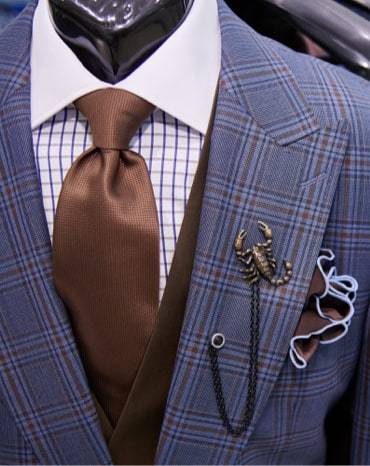 With undergraduate and graduate degrees in education, Detroit native and Marine Corps veteran, Montee Holland was a first-hand witness to fashion at a young age by way of his mother, coach and Dean of Students. To Holland, they were style. With a personal declaration to emulate his examples, birth was given to a vision. Motivated by the prohibition era and the famed Motown groups, Montee Holland, President of the Tayion Collection (pronounced Tay-on) began designing in the late eighties with little more than an eye for putting things together. That’s how it all started, with Holland “putting things together” for himself.

Encouraged by the feedback, Holland began designing for other people. The response was great, and word quickly spread. After setting aside time for college, graduate school and positions within two Fortune 50 companies, fashion again called his name, and Holland answered. Things took off so quickly, and it was almost overwhelming. Stepping out on faith Holland left his pharmaceutical sales job at Pfizer to produce his first ready-to-wear collection for the masses. Presented in 2003, The Tayion Collection with its classically tailored details and modernistic appeal was on its way.

The Tayion and T-Fusion Collections are where the Renaissance man meets the new millennium man.  Holland likes to say his brand is “where the custom suit merges with ready to wear.”  He prides himself in the ability to provide the feel and look of purchasing a custom suit at the competitive price of ready to wear found on the rack.

Holland participated in The Workshop at Macy’s in 2019 and was the first veteran-owned brand to participate in the program since Veteran and LGBTQ-owned businesses were added to the list of qualifications. Since participating in the program, the collection continues to garner much success in with men’s suiting retailer domestically and internationally and presented with the “Best in Show’ award at the 2019 MAGIC Men’s tradeshow.